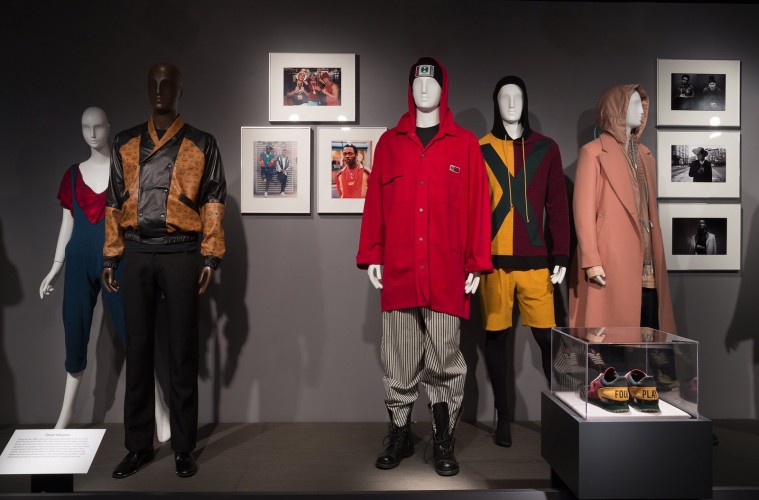 There’s something to be said for mounting a presentation where the subject matter is based primarily on race. However, the “Black Fashion Designers” exhibit at The Museum at FIT (Fashion Institute of Technology) eschews that limitation by presenting a spirited and painstakingly-curated look at the arc of the Black designer- or rather, the designer of note who happens to be Black. You are welcomed into the space by Andre Leon Talley via audio tour (and a colorful vignette of designers Patrick Kelly and Duro Olowu), and are immediately thrust into the world of eveningwear. One can’t help but marvel at the sartorial offerings of Ann Lowe and Zelda Wynn Valdez, which sit beside more recent pieces by British wunderkind Oswald Boateng and womenswear workerman Charles Harbison. Of course, one couldn’t cover Black Designers of note and not offer a piece or two from Willi Smith, Stephen Burrows and Patrick Kelly; any fashion lover from any walk of life knows them. Where the exhibit excels is in showing lesser-known yet intrinsically important designers like Scott Barrie (who some say would have been bigger had Stephen Burrows not happened), and Patrick Robinson (who has worked for everyone from Armani to Anne Klein to Paco Rabanne), while introducing – or for some, re-introducing- modern unsung luminaries like Eric Gaskins, Andre Walker, Epperson and Edward Wilkerson. All of this while also being sure to include looks from the ubiquitous Olivier Rousteing, the envelope-pushing Cushnie et Ochs and the ever-ascending Laquan Smith. Particularly enjoyable is the inclusion of a Menswear section in the exhibit. Often, when we talk about fashion in general, the menswear category is either glossed over or left out of the conversation altogether. Curators Ariele Elia and Elizabeth Way manage to give us an erudite – if not concise- overview of Black menswear designers, covering everyone from Sean John (whose 2008 fashion show set a new standard for how men’s clothing met at the intersection of urban and haute) to new kids on the block Grace Wales Bonner’s play on the fluidity of gender in fashion as well as the father-son design team of Joe and Charlie Casely-Hayford. Splendid!