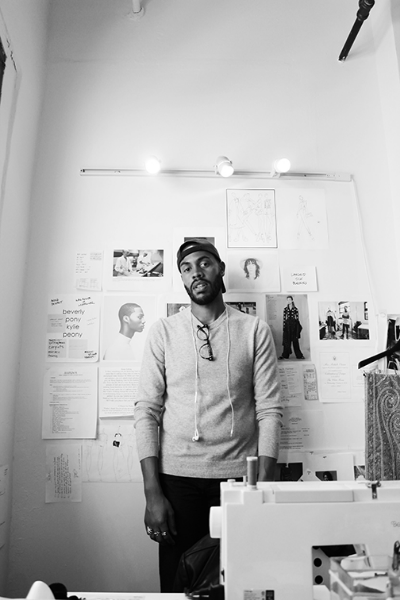 Growing up near the Appalachian Mountains in his home state of North Carolina, New York-based fashion designer Charles Elliot Harbison was disconnected from the glitz, grunge, and all things in-between of New York fashion. Nevertheless, he still managed to find his way to aesthetics. Though it might seem surprising to the average New York cool kid, Harbison learned about style at the church. “There was propriety in it,” he says. “There was personal exhibition. There was worship. It was never thoughtless. I remember white shirts, blue blazer, bowtie, some suede bucks. That’s when I became acquainted with style.”New York Fashion Week has solidified its position as the most commercial of all the Fashion Week’s. But as New York commerciality has reached its apex, a crop of young radical designers have emerged displaying awareness of contemporary art and pop culture and shining light back on American fashion: Eckhaus-Latta, Moses Gauntlett Cheng, Vejas, and Harbison. But Harbison still stands out as something of a renegade even amongst this crop of wildly exciting fashion design talent. Though Harbison comes from a fine art background, having studied fine arts and painting at North Carolina State, he does not shy away from things traditionally “chic,” inspired by the luxurious approach to sportswear his mother employed when he was a child. He has leaned towards the subversive since he started his brand three years ago, employing a gender-neutral approach to his garments far before the industry jumped on the trend. But even with that, it’s not hard to imagine Park Avenue women loving to wear his modernist, color-blocked, and astoundingly beautiful clothes, allowing him a customer far wider in demographics that some of his contemporaries could ever conceive of reaching. “I don’t think [subversiveness] has to be relegated to just casual wear or crude construction,” says Harbison. “I want to do it through the filter of elegance, expense, and aspiration.” Harbison also has some serious fashion education. Having learned about textiles and fabrics in Central Asia, studied fashion as a post-grad at Parsons, and worked for Michael Kors, Billy Reid, and Luca Luca, he has a leg up on his contemporaries with flat-out knowledge over the construction of garments. How would you describe those garments? This writer would say, “subtly striking.” They aren’t unwearable pieces of clothing architecture or tattered to shreds in the name of art. Harbison creates a form-flattering silhouette and then applies blocks of vibrant color to make the statement. They are the types of clothes that you find yourself staring at without realizing it. “Color, texture, embellishment, contrast, valence, proportion,” says Harbison. “I just wanted to be true to that when I started Harbison.” He also has the ability to tell stories without grandiose displays of conceptual creation. Everything that Harbison presents in his shows, he sells. Much like Dries Van Noten, or even Yves Saint Laurent (minus the couture), he adheres to the tenets of ready-to-wear. And yet, he still conveys strong and discernible ideas. Patti Smith is the brand’s muse, and Harbison has also told stories centered around Erykah Badu, Aaliyah, and Nica Rothschild. The strong and cultured women that breathe in his garments has attracted the attention of Beyoncé, who wore custom Harbison to Kanye’s Yeezy Season 1 presentation (and Solangé wore the same in Paris some weeks later) and brought massive attention to the brand. “What the muse does is allow me to work them into my stories,” says Harbison. When I meet Harbison in his small, clothes-filled office near Manhattan’s City Hall, he is in great spirits despite a busy morning. Though his brand sat out the last NYFW, he is still moving forward. His next collection will be the first “gender-neutral” collection where the clothes are cut in ways to fit a man and a woman’s body. He laughs a lot, and has an ease in explaining his ideas that is absent in a lot of creatives. We spoke at length about his history and the direction of the brand.