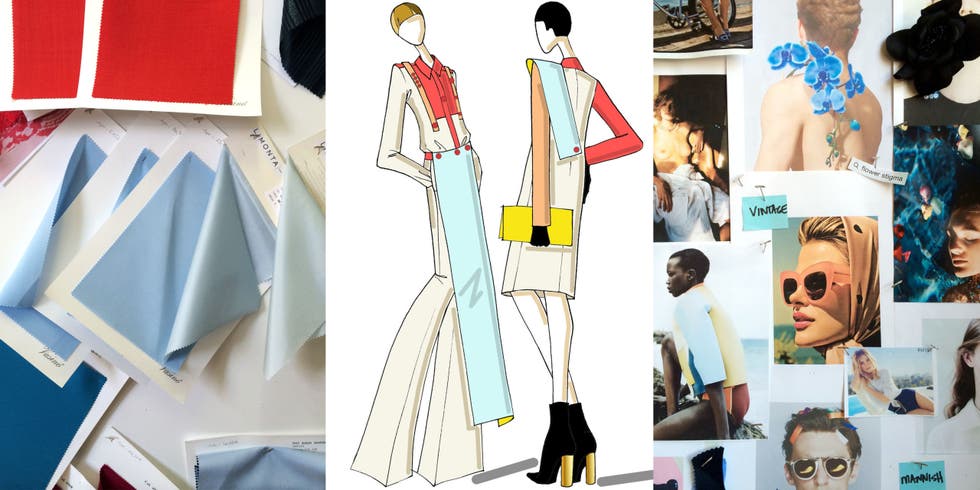 Since founding his line in 2013, Charles Harbison has created effortlessly chic, easy pieces with a focus on bold colors and precision tailoring. His slightly off-kilter color-blocking and clothing, easily worn by either gender, has the designer in demand. This spring Beyoncé donned a full Harbison look for dinner and front row at Kanye West’s eponymous fashion show. Less than a month later, Solange wore the same coat in a very different way. Harbison has always shown his collection presentation-style, but tomorrow, the designer will present his first ever runway show and partnership with G-Shock S Series watches at New York Fashion Week. “Clothes in motion are how clothes are supposed to live,” says Harbison. Here, read an interview with the designer and see an exclusive preview of the collection before it hits the runway.Harper’s BAZAAR: What’s the story behind this collection?Charles Harbison: The whole idea is that she’s a renegade surf girl. It’s about pseudo-feminism—a really tough, refined woman, or even guy. With the Casio G-Shock partnership, we can really lean on sporty. We created this 60s Lucite halo on the watch—which is a nice way to customize a ready-made piece. The collection is athleticism filtered in with something very mod. There’s some Constantin Brâncuși on the mood board. There’s a lot of circle motifs in the collection that also represent something remotely tribal. It’s taking circles, bubbles, aquatic and mid-century meets Katherine Hepburn and Brâncuși and finally, florals, and bringing them together.HB: What kind of renegade woman did you draw from in creating your pieces?CH: The primary muse of the brand is Patti Smith. I launched the collection after reading Just Kids. Patti really embodies this femininity while opting into the initiative, decisiveness and the aggression that men actually get to own as masculinity. I watched Guess Who’s Coming to Dinner and Joanna was the girl at the center of it all. She couldn’t understand why she couldn’t get what she wanted—that life or that man—and that for me was very rebellious in a pure, innocent way. I want the clothes to opt women into that feeling.HB: The Lucite details feel very new.CH: There’s a Lucite earring and pendant too. We’ve taken this concept and put them into a few other accessories that are not just particular to the watch. It also turned into something more; for example, this tunic with buttons all down the front is driving home that circle, bubble-like idea. It’s inherently sporty. HB: Your line has always had such a bold take on color. What’s your approach? CH: I’m from the South, so the nature around me was always full of color. I fell in love with color when I was in college, studying painting. I think the approach mostly stems from that. I love something on balance but slightly off-kilter. It’s important. Growing up with seemingly ugly, mismatched things all around me—from my grandma’s washed out threadbare floral sheets, all the way up to the graphic coats that my mom would wear in the 80s—all of the stuff was what one could call ‘bad taste,’ but I found it really beautiful. HB: You produce your entire line in New York City, which is so unusual. Why is that important to you CH: It matters to me on a personal level. Growing up in North Carolina, I was a working class boy. My grandmother worked in a textile mill. I have that personal connection to things made in the states. I find it socially responsible, and from a business standpoint, it’s very nice to be close to your development. HB: What’s your favorite moment since starting your line? CH: When I first saw Beyoncé in my looks. Her stylist texted me, ‘Beyoncé’s in a full look tonight.’ Twitter blew up, because she was at Kanye’s fashion show in head-to-toe Harbison. I was in a cab, like ‘What?!’ North West was loving on the fur bag! I loved it! It was right before my show too, so my anxiety was on 10 anyway. What did your football player and coach and dad make of his uber-creative son? The saving grace was that I was smart and got good grades. As long as my creativity supported that, he was fine with it. Though he may not understand this world, I think he appreciates the hard work that I put in and he’s proud of the milestones. That’s great to hear. So then what? I was doing a lot of weaving and fiber-arts and fabric manipulation and wove, like, 17 yards on the hand loom from a fabric that was indicative of my Native American culture. I looked at it and was like, ‘Well, what should I do with all this fabric?’—it didn’t feel right wrapping it on a frame to hang on the wall—so I made some clothing. After I graduated from school I went abroad to Uzbekistan to study Central Asian textiles. I wanted to try my hand in New York, because I’d had an internship at Michael Kors in the men’s collection and at Jack Spade, but it didn’t work out, so I decided to go abroad. I was in Uzbekistan for a year, and while I was away, just fell hard in love with fashion.